5/5 - (6 votes)
Disclosure: As an Amazon Associate I earn from qualifying purchases at no cost to you.

Grill and smoker combo units are phenomenal tools for outdoor cooking enthusiasts. Good pellet grills allow you to cook incredibly flavorful foods thanks to their barrel body shape and the best wood pellet grill will have you enjoying your grilling and smoking sessions for years to come.

By comparing many models on the market, we’ve narrowed down our focus to two high-end pellet smoker grills that we’ll compare below. So, without further ado, let’s check out and compare the Camp Chef SmokePro and the Traeger Pro Series 22. 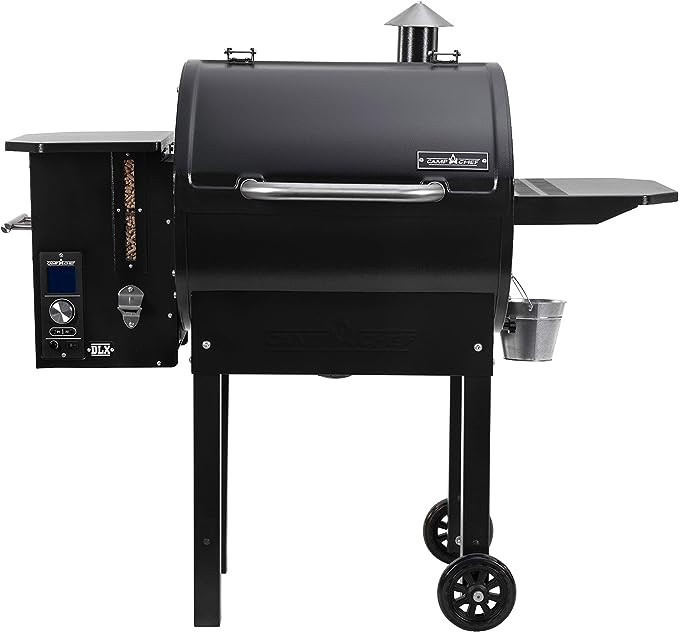 Let’s get started with the Camp Chef SmokePro DLX pellet grill in black. This unit comes with an attached sear box on the right side of the unit and runs on propane. Of course, the propane tank is not included. The aforementioned sear box is a one-burner mini grill of sorts.

On this side, the sear box also doubles as a second work shelf when it’s closed and not in use. The side shelf dimensions (non-sear box shelf) are roughly 16 by 12 inches.

The Camp Chef SmokePro DLX has what’s called a pellet purge, which is Camp Chef’s patented ash clean-out and grease management system. This cleaning system makes the unit the easiest pellet grill to clean. This compact pellet grill is capable of pumping 25,000 BTU per hour and is also capable of reaching up to 500º F.

The unit is also noted as the best pellet grill for the money and is even listed as the Industry’s Best “Bang for Your Buck” Pellet Grill and Smoker 2022. The SmokePro DLX is two-wheeled and can be moved around by slightly tipping the unit on these wheels.

In addition to its mobility, the grill offers a quite large, 570 square inch cooking area and has an auto-ignite feature. It also comes with a meat temperature probe and is equipped with an EZ hopper release.

The Camp Chef unit’s 507 square inch grilling area can be separated into two parts. First, we have the main area (rack), which accounts for 429 square inches.

It’s not completely obvious whether or not this 429 square inch includes the sear box or not, which could mean that the main area is slightly smaller than stated. Then there is the secondary rack (or warming rack), which accounts for an additional 141 square inches

The unit also sports a digital electric pellet smoker which makes the use of the smoker simple and more controlled. It turns on with the flip of an on/off switch and it has a dial that allows you to specify the temperature or smoke level you wish to maintain. Additionally, the included probe connects directly to the electric unit.

As for the unit’s hopper, it holds roughly 18 pounds of pellets. The pellets are loaded into the smoker from the hopper via an automatic auger that works for peak efficiency.

The overall height of the SmokePro unit reaches 47 inches and the first cooking grate occurs at about 32 inches height, meaning there are about 15 inches between the cooking grate and the top of the unit, plenty of space for smoking.

The Camp Chef SmokePro weighs about 140 pounds too, so it’s sturdy yet not too heavy to maneuver.

Ultimately, the Camp Chef SmokePro DLX Pellet grill is able to stand out thanks to its sear box. Even with the additional hardware and value that is the sear box, the price range for this model is right on par with the competition.

The Camp Chef SmokePro also boasts a built-in “Shutdown mode,” which doesn’t seem to be the case with the Traeger model. However, being a grill/smoker, the SmokePro DLX also shares some similarities and features with the Traeger that aren’t all that different, such as the total cooking area (570 compared to 572 square inches).

So, with these things in mind, let’s move on to the next model in review and comparison, the Traeger Grills model. 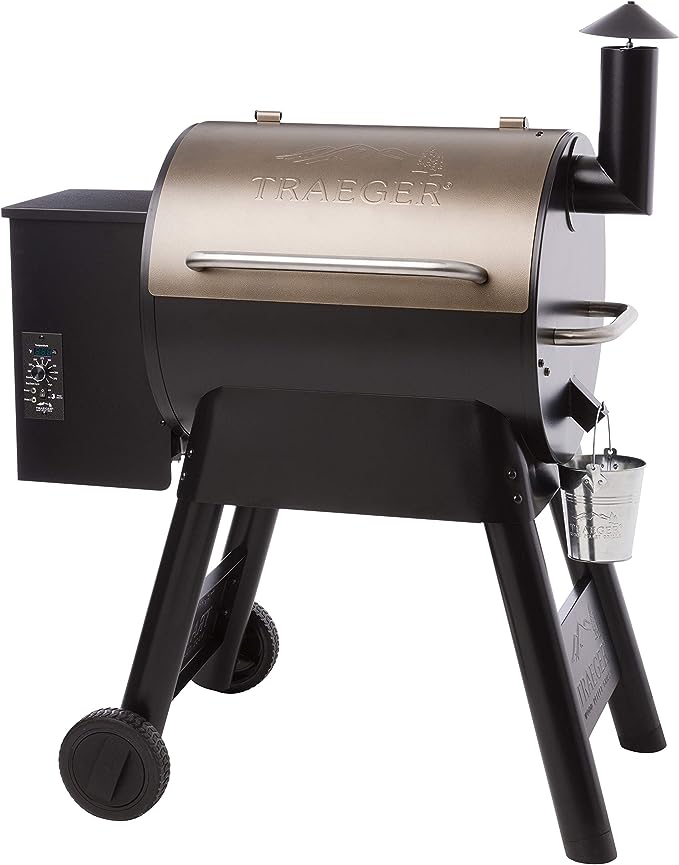 The Traeger Grills Pro Series 22 Pellet Grill and Smoker resembles the Camp Chef model in its design but it’s certainly unique in some ways. First, it’s important to note that Traeger created the original wood-pellet grill.

Another similarity to the Camp Chef model is the side table on the left of the grill/smoker that doubles as the hopper for the pellets. The hopper loader also sports a digital control system just as the SmokePro model does.

The Traeger Grills Pro Series 22 claims to have six-in-one versatility, allowing you to grill, smoke, bake, roast, braise, or BBQ your meats and other foods. Additionally, the unit itself is highly sturdy, being constructed of steel and having a powder coat finish for longevity.

The grill grates for this Traeger Grills model are porcelain and exceptionally easy to clean. With its easy-to-clean design and durability/longevity, it’s no surprise that this grill/smoker is the highest-rated pellet grill on the market.

Not only is the Traeger Grills Pro Series 22 a highly rated unit, but it’s also noted by many as the most reliable pellet grill available. Similar to the Camp Chef model, the pellets are loaded into the grill/smoker by an automatic auger that pulls the pellets from the hopper to the firepot.

There’s an induction fan below the auger, directly below the hopper, that works to stoke the fire as new wood pellets are loaded. The unit also maintains its temperature automatically after being set.

The Digital Pro Controller sports Advanced Grilling Logic, which is what allows the unit to maintain a plus/minus 15ºF temperature. In other words, the Traeger Pro 22 temperature range resides 15ºF above or below your set temperature.

The unit is also larger than the Camp Chef model, being about two inches taller. The full dimensions for the Traeger Grills Pro Series 22 are the following: 49″ x 41″ x 27″. As this Traeger Pro Series, 22 review shows us, there are many similarities to the Camp Chef model and it also has its own unique, and stand-out features.

As a takeaway, the Traeger Grills Pro Series 22 model functions in a nearly identical fashion to the Camp Chef model. The unit doesn’t come with a sear box, which isn’t the reason you buy a grill/smoker but it’s also an awesome feature that the competition utilizes.

The Traeger Grills model does have an aesthetic advantage over the Camp Chef SmokePro model with its powder-coated finish and its bronze lid.

Of course, aesthetics take a heavy back seat to the grilling and smoking functions of the unit. Its six-in-one versatility does help its case and ultimately, Traeger is a well-trusted brand in the industry.

So unless you’re hellbent on getting the model with the sear box, this Traeger Grills Pro Series 22 is a gem of a smoker.

Has the Traeger Grills other strong competitors? Click here.

So which model is really the better grill/smoker? Well, as with most things, it depends on your needs and how you expect to use the unit. Of course, if you would like the grill/smoker to have a burner, the Camp Chef SmokePro model is for you.

However, that one burner will run on propane and if you’re not looking for a model that requires propane gas as fuel, then the Traeger Grills Pro Series 22 is more suited to your wants. Both units sport very similar hopper and pellet feeder mechanisms, so there isn’t much room for distinction here.

So, the better grill/smoker of the two here is entirely dependent upon your needs while grilling and smoking. So make the decision and get your new grill/smoker today!